“The common English name of dolphin causes much confusion. This fish is not related to the marine mammals also known as dolphins (family Delphinidae). This species is commonly marketed by their Pacific name, mahi-mahi. In the Turks & Caicos Islands they are also commonly called by the Spanish name, Dorado. Mahi-mahi have compressed bodies and long dorsal fins extending nearly the entire length of their bodies. Their caudal fins and anal fins are sharply concave. They are distinguished by dazzling colors: golden on the sides, and bright blues and greens on the sides and back. Mature males have prominent foreheads protruding well above the body proper. Females have a rounded head. Females are also usually smaller than males. The pectoral fins of the mahi-mahi are iridescent blue. The flank is broad and golden. 3 black diagonal stripes appear on each side of the fish as it swiftly darts after prey. Out of the water, the fish often change color (giving rise to their Spanish name, dorado, “golden”), going though several hues before finally fading to a muted yellow-grey upon death.” Wikipidea 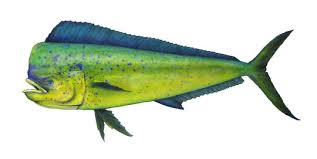